This entry was posted on May 18, 2021 by Greg Doss, CATCI.
TwitterFacebookLinkedInPinterestEmail

Many of us do not have a clear idea about what constitutes a “binge” when that word refers to drinking. We may not realize it’s an issue for us until it becomes a habit. Research shows that mechanisms in our brain can make us feel like we need to increase our alcohol consumption when we drink. Eventually, a pattern of regular binge drinking occurs. Binge drinking can have harmful – and even fatal – effects. When does binge drinking become a problem, and when is it time to consider alcohol rehab programs? What is Binge Drinking?

The Centers for Disease Control (CDC) and the National Institute of Alcohol Abuse and Alcoholism states it plainly: Binge drinking occurs when a person’s blood alcohol concentration reaches 0.08 g/dl (grams per deciliter) or higher. [1]

Why Do People Binge Drink? Some binge drink to mask feelings of sadness, loneliness, fear, anxiety, guilt, or anger. This last group may drink alone because they’re ashamed and want to hide their behavior from others.[2]

What are the Harmful Effects of Binge Drinking?

In the short term, binge drinking can lead to: [3] 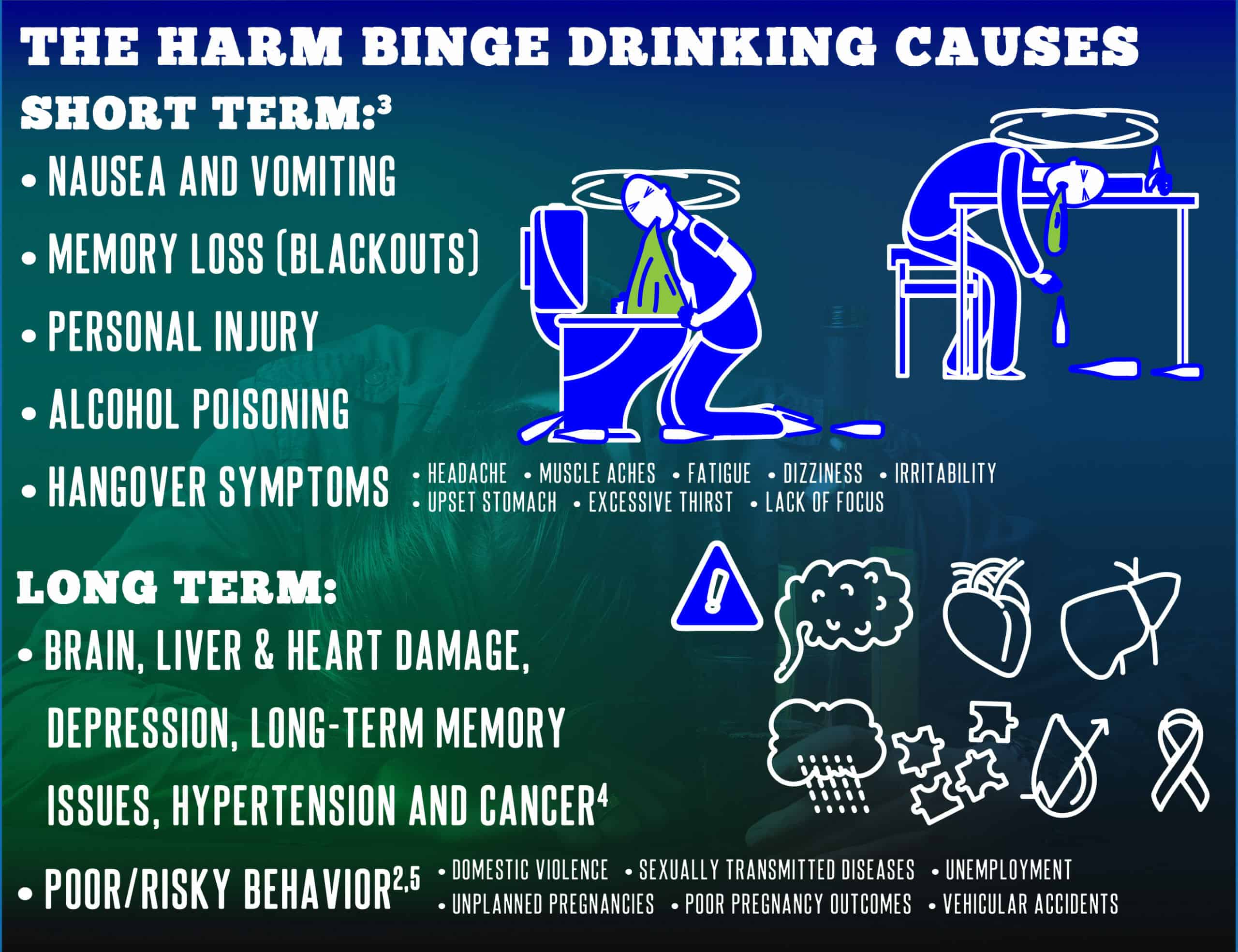 How do Brain Mechanisms Reinforce a Pattern of Binge Drinking?

A team of scientists at Texas A&M’s College of Medicine discovered that a particular cellular mechanism could contribute to alcohol-seeking behaviors. The report, published in the Journal of Neuroscience, states that alcohol can change neurons in such a way as to encourage the desire to drink more. And if this pattern continues over time, those neural changes become even more pronounced.[6] The research team studied two different types of dopamine receptors: D1 neurons encourage behavior and are known as “go” pathways, while D2 neurons (known as “no-go”) inhibit behavior. The scientists exposed mice to alcohol and found that their D1 neurons matured, which meant that they were more likely to be activated in the future. The mice not exposed to alcohol experienced no changes in their D1 neurons. In both groups, the D2 neurons were not impacted at all.

The scientists concluded that alcohol could lead to go-type behavior. They surmised that more research might lead to a way to influence the D2 neurons for a possible future solution to help people stop drinking.

One of the researchers, Jun Wang, further elaborated on the study. He said that alcohol enhances long-term memory, but not in a good way. Alcohol reinforces a specific memory that leads you to want to consume more. But binge drinking exacerbates the problem because it makes it easier for the D1 neurons to activate and could be an underlying cause of addiction. Thus, the cycle continues, with binge drinking essentially communicating to your brain that you want to drink more.[7]

What are the Signs of a Binge Drinking Problem?

Besides paying closer attention to the amount of alcohol you consume in one sitting, here are some other warning signs that may indicate the need to seek treatment:[2][8] When Does Binge Drinking Become a Problem? Alcohol Rehab Programs Can Help

Alcohol rehab programs can help individuals discover the root causes of alcohol abuse and teach people better ways to cope with those underlying issues. Because our brain chemistry reacts to alcohol in a way that can lead to addiction, it’s best to intervene before the brain has the opportunity to adapt in the most harmful ways.

Ocean Hills Recovery offers unique alcohol rehab programs that will finally give you the tools to free yourself from alcohol dependence. Contact us here to learn which of our programs may be best for you. Our caring and supporting staff members are ready to help.